You are here: Home / Library / Doctor Who: Royal Blood 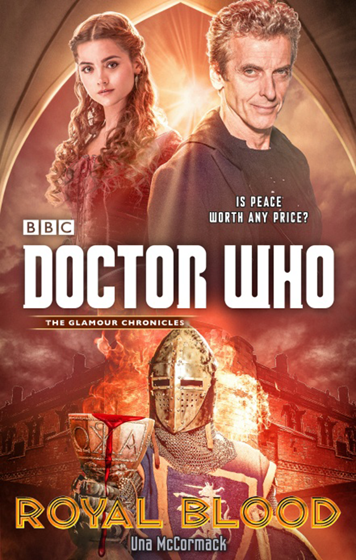 “The Grail is a story, a myth! It didn’t exist on your world! It can’t exist here!”

A Doctor Who adventure featuring the Twelfth Doctor and Clara. The city-state of Varuz is failing. Duke Aurelian is the last of his line, his capital is crumbling, and the armies of his enemy, Duke Conrad, are poised beyond the mountains to invade. Aurelian is preparing to gamble everything on one last battle. So when a holy man, the Doctor, comes to Varuz from beyond the mountains, Aurelian asks for his blessing in the war.

But all is not what it seems in Varuz. The city-guard have lasers for swords, and the halls are lit by electric candlelight. Aurelian’s beloved wife, Guena, and his most trusted knight, Bernhardt, seem to be plotting to overthrow their Duke, and Clara finds herself drawn into their intrigue…

Will the Doctor stop Aurelian from going to war? Will Clara’s involvement in the plot against the Duke be discovered? Why is Conrad’s ambassador so nervous? And who are the ancient and weary knights who arrive in Varuz claiming to be on a quest for the Holy Grail…?