You are here: Home / Library / The Never Ending Sacrifice 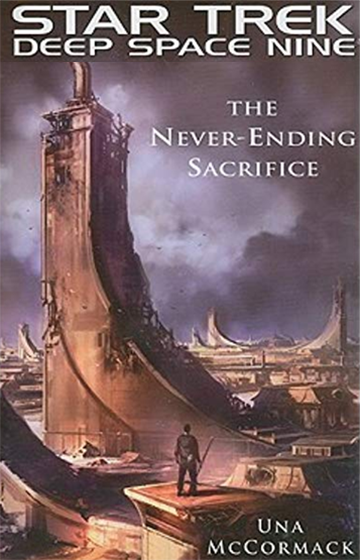 From the universe of Star Trek: Deep Space Nine, a coming of age tale in Cardassia

A boy looks up. He sees a Cardassian’s hand on his shoulder and knows that this is usually a prelude to a beating or, if he is fortunate enough, arrest. The boy knows how many disappeared during the Occupation of Bajor. So he does the one thing he can think of: he bites the Cardassian. Then the nightmare begins.

He is ripped from the family that took him in as an orphan, clothed him, fed him, always loved him unconditionally. And no matter how earnest, how caring the commander of Deep Space 9 is, the boy knows this is all a horrible mistake. How can someone from Starfleet judge him by what he looks like, not by what he is? He prays to the Prophets; he is Bajoran. They all keep telling him that the test proves the large Cardassian man is his father, that the other Cardassian — that oily gul — took him away from his father. But the boy keeps telling them that he is Bajoran, he only wants to go home with his father. So they send Rugal home — to Cardassia.

On the homeworld of the Cardassian Union where sacrifice and devotion to the state are surpassed only by the government’s need to keep its people in check, one very lonely boy discovers that if he doesn’t resist, his life — like those of so many others — will be added to the tally of the never-ending sacrifice.