You are here: Home / Library / Weird Space: the Baba Yaga 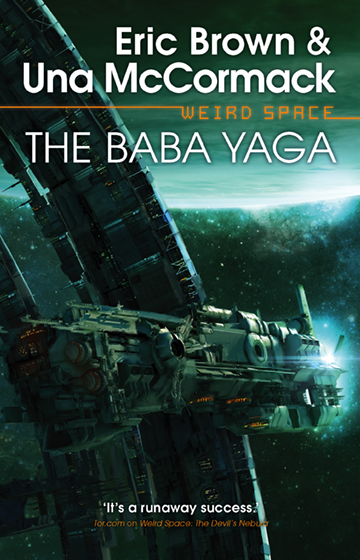 The growing threat of the dimension-invading Weird has driven the Expansion government to outright paranoia. Mandatory telepathic testing is introduced, and the colony Braun’s World – following reports of a new Weird portal opening – is destroyed from orbit, at an unimaginable cost in lives.

Delia Walker, a senior analyst in the Expansion’s intelligence bureau and a holdout of the pragmatic old guard, protests the oppressive new policies and is drummed out. Sure there’s a better way, she charters the decrepit freighter the Baba Yaga and heads into the lawless “Satan’s Reach,” following rumours of a world where humans and the Weird live peacefully side by side.

Hunted by the Bureau, Walker, her pilot Yershov, and Failt – a Vetch child stowaway, fleeing slavery – will uncover secrets about both the Weird and the Expansion; secrets that could prevent catastrophic war…